You are here: Home1 / News and Notes2 / Coach Steve Calabresi to now be Remembered on Tuesday, August 8th at M... 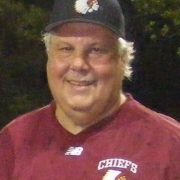 COACH STEVE CALABRESI WILL NOW BE REMEMBERED ON TUESDAY, AUG. 8
Longtime Chiefs’ Coach Steve Calabresi, who passed away suddenly in April, will now be remembered on Tuesday evening, August 8 in an on-field ceremony at Morelli Field in Melrose. The event was originally scheduled for this past Wednesday but was rained out.

“Coach Cal” will have his number 38 retired prior to the Chiefs-Americans make-up game which will be played at 7:30 PM.

Steve had served the Chiefs as their Bench Coach since 1989. He also was an Assistant Coach at Arlington Catholic and served for over a decade on the M.I.T. baseball staff under Head Coach Fran O’Brien.

Many of Steve’s family and friends are expected to attend the ceremony which is scheduled to begin at 7:00 PM.