Zac Talis and Dan Baker both homered when the Reading Bulldogs beat the Soemrville Royals 9-7 in nine innings at Trum. Brendan McDonald added two hits, including a double, and two RBI’s for the Bulldogs. Max Mardany (2-0) struck out four and didn’t allow a hit over the final two innings to grab the win.

In Wakefield, the Merchants split a three team doubleheader, losing to Alibrandis in the opener 5-2 and then came back to beat the Melrose Americans 3-0 in game two.

Stanley DeMartinis had homer and four RBI’s to lead Alibrandis to the afternoon win. Ryan Corriveau (6-1) picked up the win going five innings while Anthony DelPrete chalked up the save.

Joseph Maguire (6-3) fired a complete game five-hitter to lead the Merchants to the 3-0 game two win over the Americans. Jon Luders and Bobby Losanno had two hits each for the Merchants. Ian Libby had two of the Americans’ five hits.

On Monday the Chiefs host the Bulldogs in a doubleheader at Maplewood starting at 6:45 PM and Alibrandis visits the Blue Sox in Lexington at 8:00 PM. 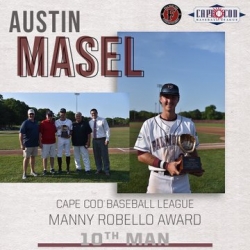