You are here: Home1 / News and Notes2 / Horan Throws No-Hitter for Watertown 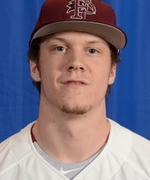 Horan was overpowering from start to finish, striking out 11 Maddogs, on the way to his second win of the young season.

Jake Miller was the offensive star for the Reds with two hits and three RBI’s, which included a two-run homer. Kyle LaVigne chipped in with a couple of hits and two RBI’s, and cleanup man Logan Gillis also added a two hit game.

Horan, who made his other start vs the Maddogs on May 29, has allowed just one hit in the twelve innings he has pitched so far this season.

For Horan, this is his second career no-hitter in the ICL. The former Franklin Pierce righty tossed a no-no against the Arlington Trojans on June 29, 2017.

Games at Ferullo Field in Woburn and Trum Field in Somerville were both washed out.