You are here: Home1 / News and Notes2 / Middlesex, Kirby Shut Down Lexington

Melrose – Zach Kirby pitched a complete game three hit shutout and Middlesex won 1-0, putting the Expos are now a win away from the 2022 Intercity League Championship.
Kirby did not allow a hit after the third inning and retired 11 straight Blue Sox from the third through seventh inning before a one out walk to Cam Meyer snapped the streak.
Kirby, 2-0, struck out nine with at least one in every frame. He walked two in his 104-pitch effort. This was the second time he faced Lexington this year. He started against the Blue Sox on July 11 and lost 4-0.
Mike Golankiewicz supplied all the offense the Expos would need in the first when with two outs he hit a solo home run to left. It was his second home run of the playoffs and of the finals.
It might not have been more than a solo home run if it wasn’t for a great play by Blue Sox shortstop Morgan Brown. Brown made a great stop of Kebler Peralta’s ground ball up the middle. He flipped the ball to second basemen Ernie Little to force Idelson Taveras and Little’s strong throw to Josue Feliciano arrived just before Peralta to complete the double play.
With the Expos getting at least one hit in each inning, eight in total and receiving six walks, they had many opportunities to score more runs. Thanks to the Sox defense and pitching Middlesex left 11 runners stranded, nine in scoring position.
In the second inning the Expos had runners at second and third when Michael Oliveira hit a hard ground ball to Blue Sox third baseman Cam Meyer. Meyer fielded it cleanly and throw home as Mike Stellato broke for home on contact. Sox catcher Alex Voitik took the throw from Meyer and was waiting at home plate for Stellato for the second out of the inning.
In the third the Expos loaded the bases on a walk to Taveras, double by Peralta and walk to Golankiewicz. Blue Sox starter Eric Lopes bore down and struck out the next three batters, all looking on 11 pitches.
Middlesex left runners at second and third in the fourth, sixth and seventh innings.
In the sixth, Sox relief pitcher Zander Gilmartin, in his first inning of work, stranded Expos on second and third. With one out, a single and walk put runners on first and second. After a balk call on Gilmartin moved the runners into scoring position, he struck out the next two batters to end the threat.
Lopes pitched five innings for Lexington. He gave up six hits, one run, walked four and struck out five. None of his four walks scored. Zander Gilmartin finished the game and struck out five of the 10 batters he faced.
Game four is Thursday night at Morelli with first pitch scheduled for 7:45.

From the Stat Sheet – This is the third time Kirby has faced the Blue Sox in the playoffs. In 2019, with Andre, he started and lost the second game of the semifinals, 9-6. Last season with Middlesex he started game two of the finals and lost 6-0.
Since 2006 this is only the fourth 1-0 game for Lexington in the playoffs. In the 2013 finals Andre defeated Lexington 1-0 in game four on a 1-hitter by Jared Freni. Lexington defeated Alibrandis 1-0 in the 2018 semifinals. In the 2019 semifinals Mike Geannelis pitched 6 shutout innings for the 1-0 win over Andre.
In 232 playoff games since 2006 (current through game 3 of finals) there have been 48 shutouts or 20.69% of all playoff games. Of the 48 shutouts eight have been 1-0 games.

Tweets by iclbaseball
Blue Sox Fight Back to Even the Series 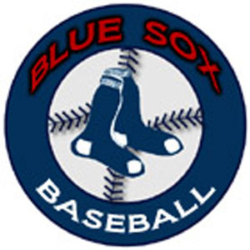 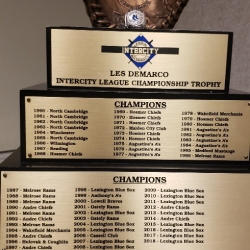