You are here: Home1 / News and Notes2 / ICL has a great Day of Baseball

Lexington – The Jerie DeAngelis Memorial Day of Baseball featured four good baseball games that saw comebacks in two of the games and history in the first game of the day.

What follows is a recap of games 2, 3, and 4, going in reverse order. The historic outing by the Chiefs Evan Walsh has a separate outing.

Lexington used a pair of three-run innings to win its fourth straight game 6-4 over Somerville.

In the third the Sox had two outs and no one on base. Aaron Barbosa started the rally with a single to left for the Sox first hit of the game. Barbosa stole second with Anderson Jiminez up and then scored on Jiminez’ single. Jiminez stole second during Kyle Adie’s at bat, who then walked. Both runners scored on a double to center by Julian Alvarez that gave Lexington a 3-2 lead.

The Blue Sox added three more runs in the fourth. They loaded the bases on a double, single and a walk with no outs. The Royals forced Alex Voitik at home for the first out, but the bases were still loaded. Barbosa followed with a two-run single to right and it was 5-2 Lexington. The third run scored on a Royals error.

Somerville took a 2-0 lead in the second as Joe Ward (walk) and Martin Marintchey (double) put Royals on second and third with one out. Patrick Forelli drove in Ward with an infield out and Anibal Peno’s single drove in Marintchey.

The Royals final two runs came in the seventh. Graham Smith led off and reached on an error. He scored on Nick Valdarrio’s double to cut the lead to 6-3. A Ryan Noone single put runners on the corners with no outs. Blasé Cormer hit a foul ball heading toward the bleachers that the Blue Sox third baseman Rory Bordiuk tracked and reached into the stands making the catch for the first out. Ward drove in the final run with a sacrifice fly to left to make the final score 6-4.

Kelvin Guzman started for Lexington and pitched four innings to earn his second win of the season. He gave up three hits, three walks and struck out two. C.J. McKinnit picked up the save with three innings of relief work.

Luke Gustavson pitched a complete game for Somerville in falling to 0-3. He allowed six hits, walked three and struck out two. The lefty had two 1-2-3 innings in the first and sixth innings.

Chris Butler’s two-run double with one out in sixth gave the Merchants a 3-1 and the win their game against Alibrandis that moved them into a three way tie for third with Malden and Alibrandis.

Joe Barry started the sixth inning rally with a lead-off walk. Bobby Losanno followed with a triple to center to score Barry and tie the game at 1-1. After the first out, Dillon Koster was intentionally walked to set up a double play. Butler ruined that move by lining the first pitch he saw into right field for run-producing double.

The game had a ten minute delay in the middle of the first inning due to rain. Once play resumed the Alibrandis took a 1-0 lead in the bottom of the first. Juan Parra walked to lead off the inning. He stole second and moved to third a fly ball to right by Teddy Dziuba. With two outs Dave Lightbody delivered with a single to left to plate Parra.

Alibrandis starter Matt Horan made the lead hold up through five innings. He retired 10 straight Merchants from the second through fifth innings and 11 of 12 batters, including four strikeouts.  In his complete game effort Horan allowed four hits, walked four and struck out eight.

James McNamara earned the win for Wakefield,  also going the distance. He allowed four hits, one run, walked one and struck out two.

The Malden Maddogs used a five run second inning to pull off a the biggest margin of victory of the day with a 7-1 win over Melrose.

The inning started with Jack Whorf being hit by a pitch by Melrose starter Brent Greeley. A walk to Brendan Roach and a single by Steve Shamnoski loaded the bases with no outs. Henry Butterfield walked on four pitches to bring in the first run and give the Maddogs a 2-1 lead. Ethan Harris followed with another walk to make it 3-1 Malden. That walk ended Greeley’s day on the mound and Mike Peters took over for the Americans. Derek Bauer greeted Peters with a single for a 4-1 lead and the bases were still loaded. After an infield out, Cal Christofori drive in the fifth run with a single for a 6-1 lead.

Melrose struck in the first. Elias Varinos reached on a fielding error to start the game. Varinos stole second and eventually moved to third on a wild pitch. Ian Libby walked and stole scored to put runners on second and third with one out. Kyle Cortese brought in Varinos with an infield out for the 1-0 lead.

The Merchants had base runners in every inning but the third and sixth and left five runners in scoring position.

Bauer had three hits for Malden and scored and drove in a run. Shamnoski had two hits and scored twice. Christofori drove in two runs. 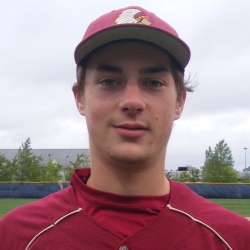