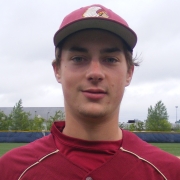 Lexington, MA– Lefthander Evan Walsh set an all-time Intercity League record when he struck out 20 batters in a 7-0 Andre Chiefs win over the Reading Bulldogs on Saturday at Lexington High. Walsh’s gem included a nine pitch, three strikeout “immaculate inning” to close the game out in the bottom of the seventh. The only hit Walsh allowed was a centerfield single to Tyler Cedeno with two outs in the bottom of the third inning.

It was the first of four games played in the ICL’s annual Jerie DeAngelis Memorial Day of Baseball.

The previous strikeout record was set by Chiefs’ righty Jared Freni who struck 17 batters on August 6, 2010 in a 3-0 win over Mooney Dental at Ferullo Field in Woburn.

The lead doubled to 4-0 in the top of the fifth. Leva walked, Walsh reached on an error, and Tony Serino drew another walk to load the bases. Reading starter Anthony Sapenza (0-1) took a big step to escape the jam when he got Andrew Caulfield to bounce into a 1-2-3 doubleplay. Matt Nuzzo saw to it that the Chiefs wouldn’t come away empty handed when he plated both Serino and Walsh with a two run double.

The Chiefs added three more runs in the top of the seventh against Brandon Mullarkey on consecutive doubles by Serino and Caulfield, that followed a Leva walk and a throwing error.

Walsh allowed four baserunners on the day. Cedeno’s single in the third and walks in the second, fourth and sixth. He threw 107 pitches, 70 for strikes. The former Bentley standout raised his season record to 2-0. He went six innings to get the win against the Bulldogs on June 5. In that game he allowed four hits and struck out 10.

Walsh, an Arlington MA native, began his career with 2014 ICL Championship edition of the Chiefs fresh out  of Arlington Catholic. Following the 2015 season, when he made nine appearances and posted a 3.50 ERA in 16 innings, he moved on to play for the Arlington Trojans in both the 2016 & 2017 campaigns. Walsh returned to the Chiefs last season when he went 4-3 in eight starts with an ERA of 2.46. He graduated from Bentley University in 2017. While pitching for the Falcons he recorded an 11-17 record in 48 appearances (27 starts) during his college career. 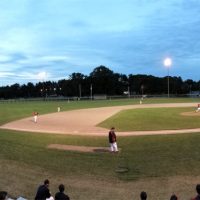 ICL has a great Day of Baseball
Scroll to top