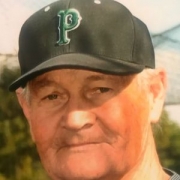 Tommy Mandile, one of the greatest pitchers ever to come out of this area, passed away this week. Tommy played for the Hosmer Chiefs and Medford Mustangs during his ICL career. He played in Chicago Cubs system for many years. At the end of his playing career Tommy became an umpire in the ICL. He was inducted into the ICL Hall of Fame in 2012.

Thomas Michael Mandile, Jr. passed away on his 76th Birthday, March 23, 2020, after a long brave battle with blood cancer.

He was a loving son, brother, cousin, husband, father, uncle, father-in-law, friend and the BEST grampy ever! Tom is survived by those whom he considered his greatest gifts: his wife of 51 years Robin (Adair); his sister Maryanne and her husband Robert Mazaka of Wilmington; his son Tom and his wife Brenda of Winchester; his son Robert (Bob) and his wife Jennifer of Lynnfield and his PRIDE AND JOY ~ his 5 grandchildren Christine, Ann Marie, Irene, William and Ryan.

Tom was born on March 23, 1944, the son of Thomas Mandile, Sr. and Irene (Quinn). He was born and raised in South Medford. He graduated from Medford HS and was drafted as a Pitcher by the Chicago Cubs. Tom pitched in the minors from 1964-68. He made the spring training roster with the big club in ’67 and ’68 where he played with Ernie Banks and pitched against Willie Mays and Hank Aaron.

After retiring from baseball, Tom worked for the phone company for over 20 years. He also worked at the Riverside school for kids in the DSS/DYS system from 1994-2005 where he was a friend and mentor to many.

Sports were always a love for Tom. He loved to play, watch, coach, umpire, and referee. He was the assistant baseball coach at Pingree HS 2000-2018. He was inducted to the Intercity League Baseball Hall of Fame in 2012. He earned the prestigious President’s Award in 2015 from the Eastern MA Umpires Association. But his most favorite pastime was cheering on all his grandchildren at every field, court, rink and dance floor that he could get to. He was loved by so many and will be greatly missed- especially at the Lynnfield DD!

There will be a “Celebration of Life” party to be held at a later date.