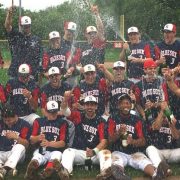 Melrose – It was the baseball equivalent of Ali vs. Frazier, Hagler vs. Hearns, or Marciano vs. Charles. The Lexington Blue Sox and Andre Chiefs stood toe-to-toe and exchanged blows before the Blue Sox Josue Feliciano delivered the knockout punch in the bottom of the ninth to give the Sox a 16-15 victory and the title.

Both teams appeared to be down and out only to get back up and rally to keep going what will go down as one the greatest playoff games in league history.

Down 15-14 after the Chiefs scored in the top of the ninth, the Blue Sox had one more rally in them finally bringing the season to a close.

Ross Curley led off with a double to center and took third on the overthrow by Chiefs center fielder Tony Serino. With the squeeze play on, Garret Smith bunted down the first line and as Curley crossed the plate with the tying run, Smith was safe when his bunt hit the first base bag and rolled into fair territory. Mike Hart reached on an infield single to put runners on first and second. Dan Graham lifted a fly ball to center and both runners tagged and moved up a base. The Chiefs appealed that Smith had left the base early and the umpire ruled him out for the second out of the inning. The Chiefs intentionally walked Steve Gath and John Puttress worked a walk on a 3-2 pitch to load the bases. All of this coming against the Chiefs ace Jared Freni in his third inning of relief work. This set the stage for Feliciano, who bunted for a single to start the Sox seventh inning rally. After swinging at the first pitch, he then bunted the next pitch down the first base line and as Hart raced home with the winning run, Feliciano slid into first to avoid the tag and give the Sox the championship.

No matter how you measure the game, it will go down as an epic battle. Game three started on Thursday August 20 at 8:36 p.m. After almost three hours of playing, a 29-minute delay occurred when the outfield sprinklers came on. With no way to turn them off the game was suspended and would be resumed on Friday night at 7:00 p.m. Mother nature intervened and the game was rained out and postponed until Sunday at 5:00 p.m. Finally, 67 hours and 45 minutes after the game began play started again. The teams played three more innings that took an hour and 16 minutes to play. The game took 4:40 to play including the 29-minute delay. From first pitch to last play was a total of 68 hours and one minute, or almost three days.

Besides being epic in time, the teams combined for 31 runs, 40 hits, five doubles, three home runs, 15 walks, 16 strikeouts and the nine moundsmen threw 450 pitches, 281 for strikes. The Chiefs and Sox left a combined 33 runners on base, including the bases loaded seven times. The third and eighth innings were the only ones in which neither team scored and both teams scored in five of the innings. In the 18 innings played, there was only one 1-2-3 inning, the Chiefs fifth authored by Lexington starter Alsis Herrera.

That is where we will start this part of the story. With the Blue Sox leading 9-5 and six outs away from victory, it seemed the Chiefs were down and almost out. Someone forget to tell them that as they put together a rally for the ages with eight straight batters reaching base after the frame started with a strikeout. Juan Portes drove in the first run with his fourth hit of the game. Mike Burgoyne had an RBI fielder’s choice and Mike Barbati followed with an RBI single that knotted the game at 9-9. With the bases loaded, a run scored when pitcher Mike DiCato was hit by a pitch. Three Blue Sox errors also contributed to the Chiefs rally, as all of them directly leading to runs.

The Sox kept battling and worked two walks off of Chiefs ace Freni, the last one to Graham that brought in Adie to cut the lead to 12-10.

The game went to the top of the seventh and Johnny Welch had a 2-2 count on him when the sprinklers came on halting the action and leading to the suspension of the game.

Now we move to late Sunday afternoon and play finally resumes. Only to see the Chiefs have to make another move. Welch, who was supposed to be up, could not make the game due to a work commitment, was pinch hit for by Nate Witkowski. He worked a walk and two pitches later came home on Portes fifth hit of the night, a two-run home run to left that give the Chiefs a 14-10 lead.

Now Lexington appeared to down and facing one of the best pitchers in the league had to score at least four runs to keep playing. An offense that had scored 192 runs in the regular season was up to the task. Feliciano began with a bunt single and went to third on Kevin Davis’ single to right. Adie followed with a single up the middle to score Feliciano and it was 14-11. A pair of ground outs to the second baseman moved the runners up with the second one driving in Davis for a 14-12 score. On an 0-1 count Hart drove a Freni fastball to left that just cleared the leap of Chiefs left fielder Burgoyne for a 2-run home run that tied the score at 14-14.

The Chiefs loaded the bases in the eighth with one out, but could not capitalize. Witkowski was retired on a foul pop up to third baseman Curley and Portes was set down for the first time on a come-backer to Blue Sox hurler Aidan Freeburg, the ninth pitcher of the game.

Freni struck out the side in the bottom of the eighth, but did allow a two out single.

In the top of the ninth, the Chiefs retook the lead for the third time. Burgoyne began with a single to right, stole second base, and Barbati sacrificed him to third. He then scored on Serino’s single to center past a drawn-in infield to make it 15-14. Freeburg struck out the last two batters to give his teammates another shot at coming back.

Now back to the beginning of our story.

The Chiefs struck quickly scoring twice in the top of the first scoring on RBI singles by Welch and Portes. Lexington came right back with a lead-off home run by Adie, his second in as many nights and then a 2-run double by Jeff Vigurs to take a 3-2 lead. After Mike Gedman’s RBI double in the top of the second tied the game at 3-3, the Sox responded with three more runs on two sacrifice flies and an RBI single by Curley. Portes drove in two more for the Chiefs with a double in the fourth and Lexington came back with another three spot in the fifth courtesy of Hart’s RBI single, a bases-loaded walk to Dorian Rojas and an error.

This was the fifth straight finals meeting between these two teams and Lexington now hold a 3-2 lead in that run and is 4-2 in six finals matchups against the Chiefs. The teams have won the last nine league championships, with Lexington holding seven of them.

While the 2015 Intercity League season has come to close and the lights are turned off for the final time the fans will have plenty to talk about over the offseason as they remember the great finish to the 2015 season.

For a complete box score and play-by-play please go to http://www.pointstreak.com/baseball/scoreboard.html?leagueid=789.